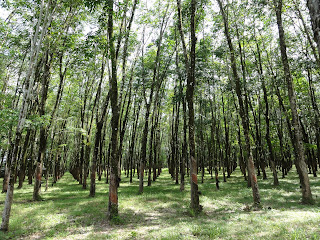 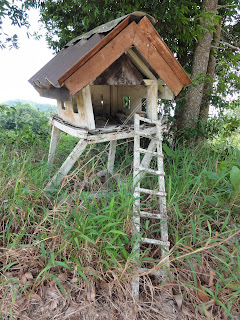 Coming Out Of Retirement, Maybe

KHUK KHAK, Thailand - Some people use the words, 'washed up,' or 'burnt out' to describe those people, usually athletes, but not always, who are considered retired and whose years of greatness and productivity are behind them.

You can think of a number of stars who have retired, and then 'laced them up again', 'returned to the court', returned to the ring, the stage, the field, government, gunslinger, or corporate world to see if they 'still had it', resurrecting some of that old time magic to once again fulfill somebody's wish.

Could be the money. Could be the money.  Probably could be the money. Big contract, big offer, big incentive, big crowds, big ego, everything big, so big it will make an over-the-hill retiree think he or she can still go out there and show those young pups a thing or two. Still got game. Lookit Ali, George Forman, Michael Jordan, Newt Gingrich, Whatshername.

What one may soon learn, especially if you haven't done much more heavier lifting than a fork, is that you've lost your edge. Timing is off.  Way off.  Things, like muscles and mind, might move a bit slower. Reaction time is too late, went for the fake, didn't catch what was said, lost me in the innuendo.

The mind, and maybe some of your friends and most ardent believers will tell you, 'You can do it!  You can do it!  Go back out there and show 'em how it's done!' and maybe you can, but after a long layoff, the body can be an unwilling or reluctant performer.  And sometimes you forget.

It could be any stage of performance; actors and comedians tossing out lines, politician making a run, third-string philharmonic flautist, substitute teacher, got called at the last minute, asking if you could fill in on the trapeze act, second semester, come run the offense, the CIA or State Department, pull the corporation out of the tank, help out weekends on the check out line.

It happens all the time, you've seen it plenty.

So, I've been testing the water.

Yeah, I'm thinking of 'giving it another go', 'tossing my hat in the ring', and yes...coming out of retirement, making a comeback. Why not?

After the last time, people said, 'This is it. He'll retire after this.' And even beforehand, there was speculation, ok, consensus that I should've have considered permanently 'hanging it up.' People shook their heads, saying I was too old, or didn't have that ol' magic, that edge, that touch, and razzle dazzle, like the old days.

They say not to let doubt enter your mind, and move forward positively toward your goals. Ok, I can buy that in theory, but one need consider reality, as well.  Sure. For instance, there won't be Manny to help with the necessary training and rigorous rehab, and not because he swore he'd never work with me again, but because he's dead.

If he was living, I think under the right conditions, the right offer, I could move him from his avowed position, and the lights just now suddenly flickered twice, which could be a 'yes' or a 'no', if it was in fact a message from Manny from the spirit world, which I am inclined to believe it was, given his temperament, so, given his temperament, I'll take that as a 'no', he won't be on board.

Manny, Mr. Ferguson, and most of those guys from the old crew, the inner circle, the 'goon squad', are either dead, doing time, or reformed and found Jesus, so I'd have to tap some new talent, new ideas, fresh faces in the places.

Gotta get your people together, people you can trust, people who'll back you, some goons, some lap dogs, some yes men and a couple of complete idiots, the best possible team behind you, whether you pulling a heist, running a monestary, or making a run for the roses.

You'll need an outline of your scheme, and a big sack of money or how to get it.  Right up front, people like to talk about the money.  Got to get the money straight, who gets what, what the expected returns will be, how a share will be divvied up if someone dies, get the unofficial, off-the-record nods from the folks who prefer to stay in the background, out of sight, out of the press.

Then there's a whole bunch of hard work, the heavy lifting to be done before you step back out there. That's a lot to consider, and you've got to ask yourself if you're really up for another go at it, and if you are, whether you've still got what it takes.  Gotta walk before you can crawl, and you gotta crawl before you can backstroke, or whatever. Could be a long shot.  Could be pathetic.  Could be glorious.


You say these same people have nukes?